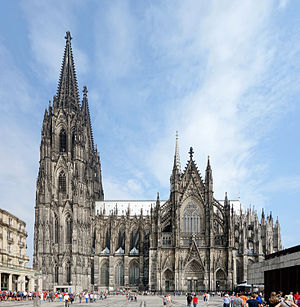 Cologne (German: Köln) is a city in Germany, in the federal state of North Rhine-Westphalia. Cologne has more than 1 million inhabitants. The Cologne Cathedral is the icon of the city. The church is built during the Middle Ages and was once the largest building on earth!

Cologne has a really big railway station. It's an important junction for trains in Germany.