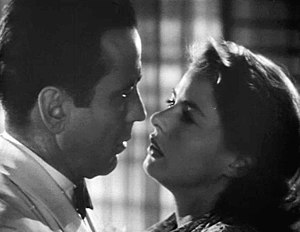 Casablanca is a 1942 movie starring Humphrey Bogart, Claude Rains, Paul Henreid, and Ingrid Bergman. Set during World War II, it tells of a man torn between his love for a woman and helping her Czech Resistance leader husband escape the Vichy-controlled Moroccan city of Casablanca to continue his fight against the Nazis.

The movie was directed by Michael Curtiz. Casablanca won three Academy Awards, including Best Picture. Its lead character, memorable lines, and theme song have all become iconic. The movie has consistently ranked near the top of lists of the greatest films of all time.