Brescia (in the Brescian dialect Brèsa, Brèssa o Brèha) is a large city located in Italy in the Lombardy region.

February 15th, San Faustino: saint of singlesand patron of the city of Brescia.

In May there is also the "Mille Miglia" race, where the competitors caress with vintage cars. The departure is in Brescia, up to Rome and coming back. 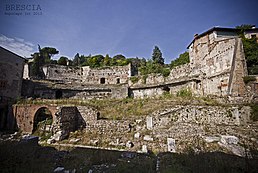 The most important place is the Roman Forum, composed of the following monuments:

The Republican sanctuary
Located under the Capitoline temple. built in the first century is the oldest of all. It has 4 classrooms with a rectangle next to the other, inside it finds the remains of the original floor and of the frescoes.
The capitolium
It was built in 73 a. c. it was the most important temple, which was detained to Jupiter, Minerva and Juno. It has three cells, the central is the largest, which ran the original floor. In front of the cells are the remains of the portico.
Roman theatre
It is located east of the capitolium. with 86 meters in length, could hold 15,000 spectators, It was damaged by an earthquake in the fifth century. Archeology work may resume in the next years.

it is an extraordinary architectural palimpsest, now transformed into the Santa Giulia Museum, which contains about 11,000 works of art and archaeological finds.

is the second largest municipality in Lombardy, and the 6 largest in Italy.

One of the municipalities of Brescia, Botticino is renowned for the production of wines and marble, the latter was used for the construction of the Altar of the homeland of Rome.

"Secret Brescia: places, stories and characters of the city" is the title of the book, but the book is written in Italian.