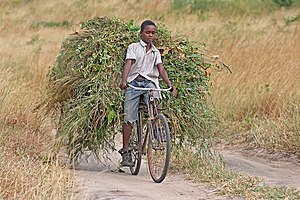 A bicycle, or bike, is a small, human powered land vehicle with a seat, two wheels, two pedals, and a metal chain connected to cogs on the pedals and rear wheel. A frame gives the bike strength, and all of the parts other than the frame are attached to the frame. The name comes from these two wheels - the prefix "bi-" meaning two, and the suffix "-cycle" meaning wheel. It is powered by a person riding on top, who pushes the pedals around with his or her feet.

Riding bicycles, which is also called cycling, is an important way to travel in several parts of the world. It is also a common recreation, a good form of low-impact exercise, and a popular sport. It is also the second most popular spectator sport in the world. Bicycling uses less energy per mile than any other human transport.

In 1817 a German professor, baron Karl von Drais, created the first two-wheeled bicycle. It had a handlebar, and looked like a bicycle of today, but it didn't have pedals, and it had a wooden body.

In the 1860s, French inventors added pedals to the front wheel. However, it took a lot of effort to turn the pedals. Later inventors made bikes out of metal only, and made the front wheel very big, giving higher speed. This design was called the penny-farthing bicycle. However, it was difficult to ride, since it could fall easily.

In 1888, Scottish inventor John Boyd Dunlop re-invented a type of tire which was filled with air, and this made cycling far more comfortable.

Soon, the freewheel was invented. This was a device inside the hub of the back wheel that allowed the wheel to spin even if the rider wasn't pedalling. However, this meant the rider could no longer stop the bike by backpedalling. As a result, a different type of brake was invented which could stop the bike if the pedals were turned backwards. Later inventions included better brakes, and gears, which made cycling over hills much easier. During this time the bicycle became very popular.

The mountain bicycle is used for riding on rough roads. They have many speeds (usually more than 20), wide tires, and powerful wheels. The tire tread is specially designed to ride smoothly on hills, grass, and mountains.

The Urban bicycle is used for the convenient ride around the city. It is comfortable and has a relatively high speed. It has a comfortable seat but is heavy. It usually has fenders to keep water and mud from spraying the rider.

The tandem is a bicycle for 2 people. It has two pairs of pedals. The cyclists sit one behind another. The first cyclist steers the bicycle. There are bicycles for 3 and more people. There was a bicycle for 40 people.

Electric bicycles have electric motors normally found inside the hub of either the front or rear wheel. You can choose to ride using the motor only, or with pedals only or with both together.

In the U.S. the federal government has set a limit of 750 Watts and a top electric-powered speed of 20MPH to have only the rules that apply to bicycles and no extra restrictions such as operator license, vehicle license, registration or insurance requirements.

A road bicycle usually has smaller tires, less than 1" thick, with a frame that is much lighter than a mountain bicycle. Road bikes are a great option for training longer distances and changing out the pedals for clip in shoes are the best way to go. There are variations, as some road bicycles have regular tires. A road bike can go very fast and is a good choice when participating in a bike race.

It is very important to ride on the safe side of the road for the direction of motion. To avoiding hitting people, obey signs that say "no bicycling", even if it does not seem to make sense at the time.

It is also very important to correctly wear a helmet, because falling down from the bicycle many times in a lifetime of bicycle riding is very likely.

Bells that a bicycle user can put on the handlebars and ring while riding also exist.