From Vikidia, the encyclopedia for 8 to 13-year-old children that everybody can make better
(Redirected from Luís Vaz de Camões)
Jump to: navigation, search 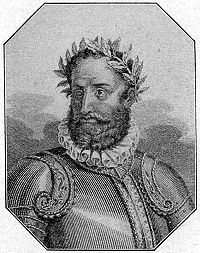 Luís Vaz de Camões (Constança, 1524 - Lisbon, 1580) is considered to be one the greatest Portuguese poets.

His best known work is an epic poem called "Os Lusíadas", a 10-chapter book written in verse, where Camões tells the story of the amazing trip of Vasco da Gama that first connected Europe to India by sea. Vasco da Gama has many adventures and meets an African King, who didn't know who the Portuguese were. So, Vasco da Gama summarizes the Portuguese History so the king gets a general idea.

Camões was also a soldier for a brief period and lost an eye in a battle in North Africa.

He travelled throughout the world on some of the sea routes the Portuguese discovered. On one of those trips, going from Macau (China) to Goa (India), both Portuguese possessions by then, he was shipwrecked and swam ashore using only one arm, while he was holding high his unfinished "Os Lusíadas" on the other hand.

He died in 10 June, the national day of Portugal, the Portuguese Communities and of course, the day of Camões.

His remainings location is uncertain (probably due to the 1755 massive earthquake), but his symbolic tomb is in one the Portuguese World Heritage monastery: Mosteiro dos Jerónimos, in Lisbon.