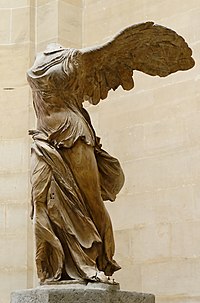 Winged Victory of Samothrace is a marble sculpture. It stands 244 cm (96 in) tall. It was sculpted about 200–190 BC by an unknown Greek sculptor to honor the goddess Nike (Victory) as well as a sea battle.

Winged Victory was discovered in 1863 on the island of Samothrace, and has stood on the Daru Staircase in The Louvre since 1883. It originally stood in a niche in a theatre.

Winged Victory was moved from The Louvre in 1939 to the Château de Valençay for safekeeping as World War II approached.