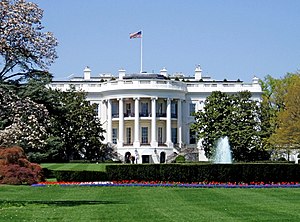 South facade of the White House

The White House is a building in Washington, D.C. where the president of the United States lives. The house was designed by Irish-born architect James Hoban. It was built between 1792 and 1800. It is built of sandstone. The building is located at 1600 Pennsylvania Avenue NW in Washington, D.C. It has been the residence of every U.S. president since John Adams in 1800. During the War of 1812, the mansion was burned by the British Army, destroying the interior and charring much of the exterior. A famous story tells of Dolly Madison rescuing a portrait of George Washington. Many notables have been entertained at the White House including Elizabeth II