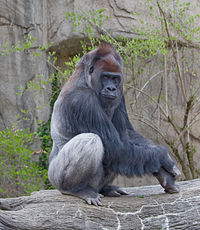 Gorillas typically live in family groups, consisting of several adult females and their offspring. The groups are led and protected by a dominant male known as a "silverback."