The weasel is the smallest European carnivore. 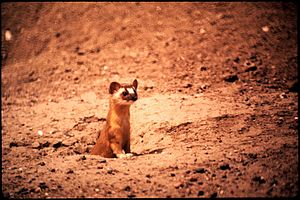 It lives in holes of the ground or in the hollows of the trees both in the plains and in the mountains, he can reach up to almost 3,000 meters of altitude.

He attends both the open and free fields and the densest forests and is at ease both in the deserted places and in those inhabited by man.

Weasel belongs to the mustelidi the species was born in Oligocene period.

The weasel it appears in fairy tales[edit | edit source]

Its presence in art or music[edit | edit source]

In 2015 it was released a film about a mouse that has to defend its campaign from the assault of a group of weasels.

This film is called "Gamba" and was made by Atsuo Saito.

Here is the image of the film

I found things in Wikipedia