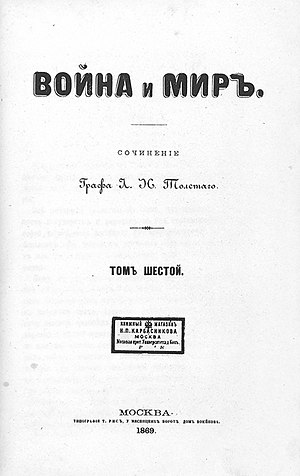 The first edition of War and Peace

War and Peace is a novel by Russian author Leo Tolstoy, published in 1869. War and Peace is one of the most well-known books in the world literature. According to Tolstoy, the book is not a novel, a poem or a historical chronicle. It is one of the largest books, with publications over one thousand pages, with many characters and storylines.

War and Peace takes place between 1805 and 1820, starting by the invasion of Russia by Napoleon. The book follows five aristocratic families in Saint Petersburg and Moscow. Natasha Rostova, a member of one of those families, is probably the most well-known character. The book mostly focusses on the aristocrats and less on the normal people, such as farmers, servants en soldiers. Even historical persons, like Napoleon, appear in the book.

Although the novel is mostly written in Russian, the dialogs are written in French. Then, the aristocrats spoke French against each other, while Russian was the language of the normal people. War and Peace is made into television series, movies, opera, plays and a musical. The 1956 American film version of the novel is probably the most famous and focusses only on Natasha Rostova (played by Audrey Hepburn) and her relationships with Pierre and Andrei