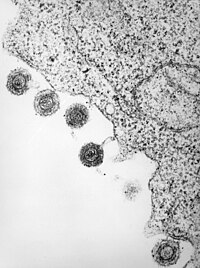 Tiny herpes viruses (the five, ball-like structures at the left) infecting a human cell (at the right).

A virus is a tiny parasite of living beings, that thrives in their cells.

Viruses are not tru living beings, since they do not have cell, and, furthermore, they don't eat, they don't grow, and they don't reproduce temselves. Instead, virus are able to force the living beings' cells to copy them, wich is called replicate.

Despite they are not true living beings, viruses are made about the same way : they contain the same type of molecules (such as proteins), and a genetic information, beared by a DNA or a RNA molecule.

A virus is able to insert its own geneteic information into the genetic information of the cell, so that the cell mistakes, and replicate the virus instead of doing its normal work.

Many virus are agents responsibles of diseases, such as flu, AIDS, etc. ...