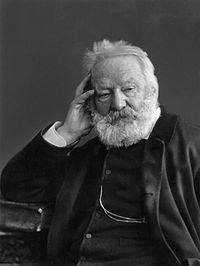 Victor Hugo was a French writer of the Romantic era. He was born on 26 February 1802 in Besançon, France. He died on 22 May 1885 (aged 83) in Paris, France. He wrote the novels The Hunchback of Notre Dame (Notre-Dame), Les Miserables, and Toilers of the Sea.

It is also known to be a very committed writer (against the capital punishment for example) and to have made great political discourses. In 1848, it becomes appointed of Paris. In December 1851, he is opposed to the dictatorship of Napoleon III and must live in exile in the Channel Islands until the end of the Second Empire in September 1870.