From Vikidia, the encyclopedia for 8 to 13-year-old children that everybody can make better
(Redirected from USSR)
Jump to: navigation, search 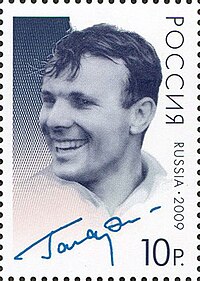 Yuri Gagarin, hero of the USSR

The Soviet Union or Union of Soviet Socialist Republics is a country that doesn't exist anymore. It was created in 1922 as a result of the October Revolution and it ceased to exist in 1991 with the end of the Cold War.

After Stalin's death, reformists took control of the country and launched capitalist reforms, believed by some to have lead to the 1991 dissolution of the Soviet Union.[1]

In 1961 the Soviets sent the first man in space, Yuri Gagarin.