UEFA Champions league from 1992 until today is the most prestigious tournament in Europe. The winning team has the right to participate in the European Super Cup and the World Cup This tournament was called many years ago "The Champion Cup" 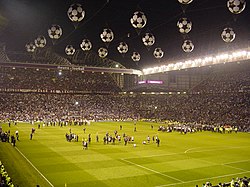 In 1955-1956, the first meeting of the Champions League was held, which included, upon invitation, sixteen teams from the main European football federations. Real Madrid in a few years had become the strongest team in the Champions League because of winning the cup for 5 years straight. The first Italian team that won the Champions was Milan, who won the Cup in 1963. The Italian teams who won the Champions later are Inter and Juventus. At the beginning, the tournament included two rounds of direct elimination, but in 1991 other elimination stages were introduced, making the race more competitive. In 1992 the competition changed its name to the current UEFA Champions League. Until 1997 only the winning teams of the respective national championships participated. Since 1997, it was decided that even the teams that had reached the second, the third and the fourth places could participate.

The first championship teams can take part in the UEFA Champions League. The teams qualify according to the ranking position obtained the season before. These teams are added to the winning team of the previous edition. Each State has a number of participants who change according to the championship. UEFA decides what teams can participate and how they participate. Each participating team must offer some efficient services in order to take part in the tournament, such as a good conditions stadium.