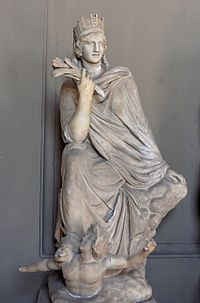 A statue of Tyche at the Vatican.

Tyche also known as (Tuch) in Greek mythology. She is the goddess of fortune.[1][2] Tyche's sister is Eudora.[3]

Tyche is one of the Oceanids. Oceanids are the daughters of the Titans Tethys and Okeanos. The story of the Oceanids is told in the Theogony by Greek poet Hesiod. Tyche and her sister Eudora stand for a joining of bounty and luck. This story is told at more length in the Oxford Classical Dictionary.