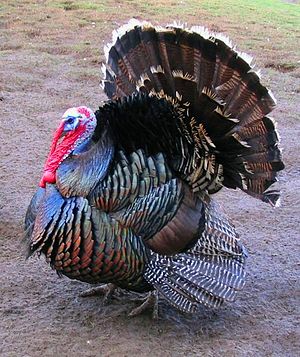 A male wild turkey (Meleagris gallopavo) fans its tail feathers. The "wattle" can be seen at the beak.

Male turkeys are larger and more colorful than the females. The male wild turkey will fan its tail in a spectacular display. Male turkeys of both species have a fleshy "wattle" hanging from their beaks. Turkeys are related to pheasants, grouse, partridges and other members of the family Phasianidae. 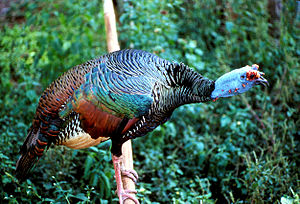 The turkey was named by Europeans who discovered the bird in the New World. For them, the bird resembled a guinea fowl imported into Europe from Turkey. These Europeans believed the New World was part of Asia. Other birds called turkeys are not related to the New World species.