Coat of arms of the city of Turin

Turin was particularly important in the history of the Italy: It was indeed the capital of the Savoy duchy and was the capital of Italy from 1861 to 1865.

Turin counts 905,780 inhabitants and its urban area has a population of 1.7 million. 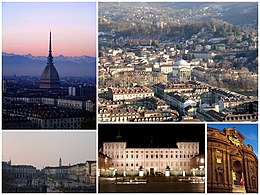 A collage of Turin: in the upper left there is the Mole Antonelliana, followed by a view of the city below the snow, Piazza Vittorio Veneto, the Royal Palace of Turin and the Museum of the Risorgimento (Palazzo Carignano)

The history of Turin started in the 2nd century Before Christ, when on the banks of the river Po, the first Celtic tribe settled, looking for arable plains. These tribes were called Taurisc: hence the word "Torino" and the nickname "city of the tauri (latin for bulls)".

It became a Roman city in 28 B.C. under the name of Augusta Taurinorum. In those times, it was a military centre surrounded by walls and with a square plant. After the fall of the Roman empire, it passed under the control of the Ostrogoths, the Lombards and the Franks. This is one of the darkest historical periods of the city.

In the XV century it became the capital of Savoy; this contributed to its expansion.

In the 17th century, the city widened by buying Montferrat, which allowed to have an outlet to the sea.

In 1706, French troops besieged Turin: the siege was interrupted by the arrival of the Austrian soldiers.

In 19th century, Turin was the centre of the Italian Risorgimento with Vittorio Emmanuele II, King of the Savoy dynasty, Camillo Benso Count of Cavour, Giuseppe Garibaldi, men who managed to unify Italy. Thus, in 1861, Turin became the first capital of the Kingdom of Italy (which lasted until 1865). 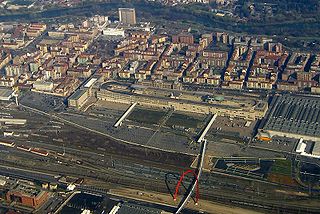 Lingotto, the headquarters of Fiat

Torino is the second province in Italy for export values. Third economic center of the country, it is part of the Italian industrial triangle, made up of Milano, Torino and Genoa. The computer centre is quite developed.

Different companies were created in Turin, including: