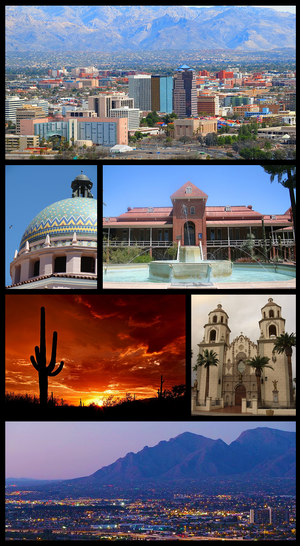 Tucson is a city in south-central Arizona, United States of America. It is the county seat of Pima County, and home to the University of Arizona.

The 2010 United States Census puts the city's population at 520,116, while the 2013 estimated population of the entire Tucson metropolitan area was 996,544. Tucson is the second-largest populated city in Arizona behind Phoenix.

The city is located 108 miles (174 km) southeast of Phoenix and 60 mi (97 km) north of the U.S.-Mexico border. About 150 Tucson companies are involved in the design and manufacture of optics and optoelectronics systems. Tucson is nicknamed Optics Valley.

The area was originally settled and cultivated by native peoples. Jesuit missionary Eusebio Francisco Kino visited the Santa Cruz River valley in 1692, and founded the Mission San Xavier del Bac in 1700. A military fort, Presidio San Agustín del Tucsón, was constructed on August 20, 1775. Tucson was incorporated in 1877, making it the oldest incorporated city in Arizona. Tucson is a Spanish word, roughly meaning "at the base of the mountain".