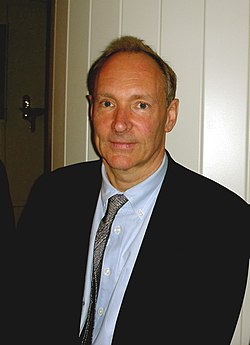 Sir Timothy John Berners-Lee [1] (born 8 June 1955),[2] is a British computer scientist who is best known as the inventor of the World Wide Web. In 1989, Berners-Lee, a graduate of Oxford University, made a proposal for an information sharing system while working at CERN, the European Particle Physics Laboratory.[3] His proposal was not accepted as a project for CERN. However, he was given time to work on the project on his own.[4] In 1990 he wrote the first web page and others were invited to join in and create web pages using his software.[4]

He was born on June 8, 1955 in London, England.[5] He attended Emanuel School, then went to Queen’s College, Oxford University.[5] There he received a degree in physics.[5] After graduating Berners-Lee worked for Plessey Telecommunications[2] in Poole, England.[5] In 1978 he worked for D.G Nash, Ltd., as a software engineer. In 1980 he joined CERN in Switzerland as a consulting software engineer.[2] In 1984 he wrote a paper "Information Management: A Proposal".[6] He described the concept of hypertext used on an internetwork (internet) to share information within a company and also globally.[6] He called it the World Wide Web.[6] The idea was not an immediate success. With the help of CERN computer scientist Robert Cailliau and others he continued to develop the idea.[6] By 1990 the first web page had been written. Others were invited to participate and create web pages.[4] As the web grew, Berners-Lee decided everyone should be able to participate and without paying any fees.[4]

Berners-Lee's contributions to the World Wide Web did not make him rich, like Microsoft founder Bill Gates.[7] To make sure the web remained accessible without royalties or fees, in 1994 he formed the World Wide Web Consortium.[7] The Consortium promotes standards and protocols and helps to work out problems between companies who develop web based services and products.[7]