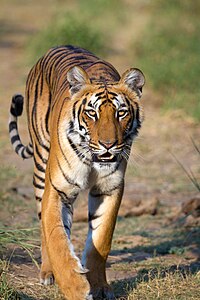 The tiger (scientific name : Panthera tigris) is a mammal. It is the largest member of the cat family, the Felidae. There are 41 members of the Felidae, including the domestic cat. These animals are called felines.

All tigers are meat-eaters (carnivores) that live in the jungles, grasslands, and forests of India and southeastern Asia. There are six living subspecies of tiger.

The tiger is an endangered species. Its living areas are disappearing due to human developments, and its numbers are declining due to poaching. The tiger has long been featured in literature, especially children's stories.

There are 10 recognized subspecies of tiger. One became extinct in prehistoric times. The remaining subspecies all survived at least into the mid-20th century. The tiger has 6 living subspecies, and 3 extinct (†) subspecies. These three were made extinct sometime in the last two centuries. 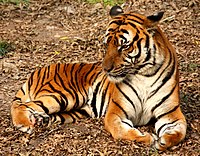 Tigers can weigh up to 850 lbs and measure up to at least 11 ft. The animal is distinctive for its reddish-orange coat, black stripes, and snow white belly. No two tigers have the same pattern of stripes. These stripes act as camouflage when the tiger is hunting.

Sometimes there are tigers with different colors. There are white tigers that have white fur with black stripes. Some even have pure white fur. They have blue or green eyes. Most Bengal tigers have orange fur. The white coat only appears once in every 10,000 births.

Distribution of the tiger

Tigers were once widespread in Asia, but today they are found mostly in India and southeastern Asia. They live in the taiga of Russia, open grasslands, and tropical mangrove swamps.

Tiger with its recent kill

All tigers are meat-eaters (carnivores). They eat many different types of prey, mostly other large mammals. Some examples are deer, monkeys, wild pigs, tapirs and other animals found in Asia.

Some tigers may eat up to 50 lbs of meat a day. Tigers kill their prey by clamping down on the prey's throat and suffocating it. 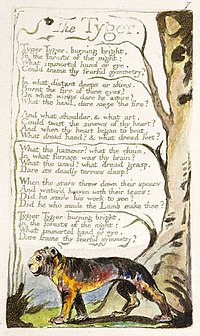 There are an estimated 3,000 tigers in the wild. Their numbers have seriously declined since 1900 due to habitat loss and poaching. The tiger is an endangered species.

Famous literary tigers include the one "burning bright" in William Blake's poem "The Tyger"; Shere Khan in The Jungle Books by Rudyard Kipling, the four melting tigers in Little Black Sambo, Tigger in the Winnie the Pooh books by A. A. Milne, and Hobbes in the comic strip Calvin and Hobbes.