The front and hind legs have approximately the same length, the giraffe's neck can reach even two meters in length. His teeth are very large, but it is difficult to see them. He has clogs. He has a long tongue. He has small horns. The royal giraffe extends in South Africa and Somalia, the giraffes normally live in savannahs, in prairies or in the woods, their main food4 are the acacia leaves.

The giraffe is a mammal African is the highest living animal in fact its characteristic long-legged legs and neck, their horns are called bones. It is classified in the family of the giraffes its only relative that there is also today is the okapi.

The giraffe ea 34 kg of leaves a day, lives in warm places.

Usually they live in savannah prairies and woods.

The giraffe is represented as a friend for children and for adults in the fairy tales giraffes also speak. 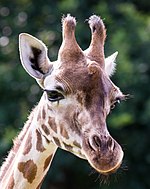 I found the information in Wikipedia