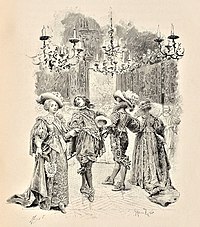 The Three Musketeers is a novel by Alexandre Dumas. It was first published in serial form in the newspaper Le Siècle between March and July 1844. The novel was followed by two sequels: Twenty Years After and The Vicomte of Bragelonne: Ten Years Later. The novel has been adapted to plays, movies, a musical, four operas, and television programs.

The story is set in the early 17th century, and tells of a young man named d'Artagnan. He leaves his country home to join the Musketeers of the Guards.

The three musketeers of the title are his friends Athos, Porthos, and Aramis. They have many adventures together. Their chief adventure involves the recovery a missing necklace belonging to Queen Anne of Austria.