The Ring of the Nibelung 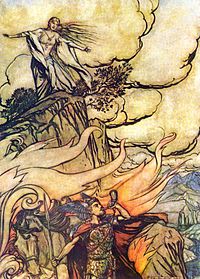 Siegfried leaves Brünnhilde for further adventures at the beginning of the fourth and last opera in the Ring cycle, Twilight of the Gods

The Ring of the Nibelung (German: Der Ring des Nibelungen) are four operas that tell the story of the hero Siegfried and a magic ring. The four operas are called a "cycle". These four operas are The Rhine Gold, The Valkyrie, Siegfried, and Twilight of the Gods.

Richard Wagner wrote the words and music for this cycle. He based the operas on a very old German poem called The Song of the Nibelungs, and on other German and Scandinavian poems, tales, and mythology. 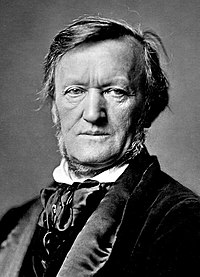 Richard Wagner wrote the words and music of the Ring. He began work on the cycle in 1848 and completed it in 1874.

Progress on the cycle was interrupted with the composition of the operas Tristan and Isolde and The Mastersingers of Nuremberg.

Other events in Wagner's life that interrupted progress on the Ring included the disastrous 1861 Paris premiere of Tannhäuser and the 1866 death of his first wife, Minna.

Wagner's Ring is a mixture of old German and Norse tales, poems, sagas, and mythology. Wagner's main source was an old German poem called the The Song of the Nibelungs. This poem is about the dragon-slayer Siegfried.

Norse sagas Wagner read in connection with the creation of the Ring included the Völsunga saga, the Prose Edda, and the Poetic Edda.

Wagner conceived the cycle as a trilogy of operas in the manner of ancient Greek drama. The trilogy would tell the story of the hero Siegfried. A prelude opera would provide the trilogy's backstory. 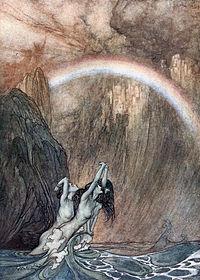 The Rhine Gold. In the first opera of the cycle, the gold lying at the bottom of the Rhine River is stolen by a Nibelung dwarf. He forges a magic ring from this gold that will give its possessor power over the entire world. Its possessor will be troubled with great anxieties and will be killed when the ring is acquired by another. The next three operas in the cycle are the story of Siegfried, the hero of the Ring.

The Valkyrie. In the second opera of the cycle, Siegmund and Sieglinde, fraternal twins and the last of the Walsung people, mate to produce an infant that will continue their race. This infant will eventually be called Siegfried. At the end of the opera, Brünnhilde, a Valkyrie, disobeys her father Wotan, the chief of the gods. He strips Brünnhilde of her immortality, makes her a mortal woman, and puts her to sleep on a rock surrounded by fire. Only a fearless man will be able to waken her.

Siegfried. The third opera tells of the hero's youth. His father and mother, Siegmund and Sieglinde, are dead, and their child, Siegfried, has become the foster child of Mime, a Nibelung dwarf, who wants to acquire the magic ring for himself. In The Rhine Gold, the first opera of the cycle, the magic ring and the golden treasure of the race of the Nibelungs are given to a dragon called Fafner. Siegfried kills the dragon and takes the ring. He wakens Brünnhilde, and takes her for his mate.

Twilight of the Gods. In the fourth and final opera in the cycle, Siegfried gives the magic ring to Brünnhilde when he leaves her for heroic adventures. In the court of the Gibichungs, he is given a potion of forgetfulness. He forgets Brünnhilde. Gibichung ruler Gunther and Siegfried seize her as Gunther's bride.

Brünnhilde accuses Siegfried of faithlessness and treachery. Gunther and his sinister friend Hagen murder Siegfried. Brünnhilde orders his funeral pyre be made ready, then rides into the flames on her horse, Grane. The Rhine overflows, washing everything away. Valhalla burns in the heavens.

First performance of The Rhine Gold at the Bayreuther Festspielhaus in August, 1876

The Ring of the Nibelung was first performed in its entirety at the Bayreuther Festspielhaus in Germany in 1876. It was a huge success. Today, opera companies perform the operas as stand-alones within a larger repertory of operas, or present all four operas one at a time over four consecutive nights as a complete Ring. Only the greatest opera companies can afford to mount the complete Ring. The cycle requires the very best musical talents.

Performances of the complete cycle are available on CD and DVD. Excerpts from the cycle are well known to music lovers and the general public. These excerpts include: