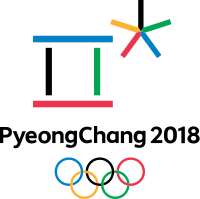 The 2018 Winter Olympic and Paralympic Games take place in PyeongChang, in South Korea. The slogan is "Passion. Connected.", it refers to a world open to everyone.

The 2018 Winter Olympics, officially called XXIII Olympic Winter Games, last for 17 days from 9 to 25 February 2018. There will be 2920 athletes participating from 92 different nations. Ecuador, Eritrea, Kosovo, Malaysia, Nigeria, and Singapore will compete for the first time in Winter Olympics.

Both events are hosted in Pyeongchang, a county in South Korea, 30 years after the Summer Olympic Games in 1988 held in that country's capital Seoul. PyeongChang was selected as a host for both events in 2011.

15 disciplines of 7 sports are represented: