From Vikidia, the encyclopedia for 8 to 13-year-old children that everybody can make better
Jump to: navigation, search
For the geometric shape, see Pentagon 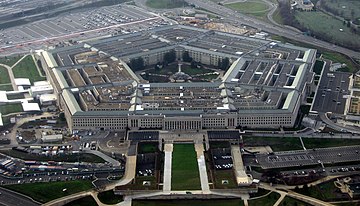 The Pentagon is the headquarters of the United States Department of Defense. It is in Arlington, Virginia (near Washington, D.C.). It has limestone walls. It is in the shape of a pentagon. It has seven floors. There are 23,000 people working in it.

The Pentagon is the biggest office building in the world,[1][2] but any place in the building can be reached within 7 minutes.[3]

The Pentagon is has the most floor area of any building in the world. It has a total floor area of 604,000 m2. Offices are 344,000 m2.[2][5] Approximately 23,000 military and civilian employees[2] and about 3,000 non-defense support personnel work in the Pentagon. It has five sides, five floors above ground, two basement levels, and five ring corridors per floor with a total of 28 km[2] of corridors. The Pentagon includes a 20,000 m2 (2 hectares) central plaza, which is shaped like a pentagon.[6]

The concentric rings are named (from the center out) as "A" through "E" (with in addition "F" and "G" in the basement). "E" Ring offices are the only ones with outside views and are generally occupied by senior officials. Office numbers go clockwise around each of the rings, and have two parts: a nearest-corridor number (1 to 10) followed by a bay number (00 to 99), so office numbers range from 100 to 1099. These corridors radiate out from the central courtyard, with corridor 1 beginning with the Concourse's south end. Each numbered radial corridor intersects with the corresponding numbered group of offices (for example, corridor 5 divides the 500 series office block). There are a number of historical displays in the building, particularly in the "A" and "E" rings.

Floors in the Pentagon are lettered "B" for Basement and "M" for Mezzanine, both of which are below ground level. The concourse is located on the second floor at the metro entrance. Above ground floors are numbered 1 to 5. Room numbers are given as the floor, concentric ring, and office number (which is in turn the nearest corridor number followed by the bay number). So, office 2B315 is on the second floor, B ring, and nearest to corridor 3 (between corridors 2 and 3). One way to get to this office would be to go to the second floor, get to the A (innermost) ring, go to and take corridor 3, and then turn left on ring B to get to bay 15.[7]

A person can walk between any two points in less than seven minutes.[8]

Just south of the Pentagon are Pentagon City and Crystal City, extensive shopping and high-density residential districts in Arlington. Arlington National Cemetery is to the north. The Washington Metro Pentagon station is also located at the Pentagon, on the Blue and Yellow Lines. The Pentagon is surrounded by the complex Pentagon road network.[9] Every day, thousands of commuters traveling between Arlington, Virginia and Washington, DC drive on the roads of the Pentagon Reservation.

The Pentagon Athletic Center (PAC) is a fitness center for military and civilian staff. It opened in a separate building on the north side of the Pentagon in 2004.[10] Each year, the Pentagon grounds hold the Marine Corps Marathon and the Army Ten-Miler running events.

The public may take a 60 minute long tour of the building.[11] Tourists also visit the Pentagon Memorial that is on the building's west side.[12]

Some numbers about the Pentagon[edit | edit source]