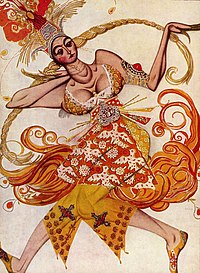 The Firebird is a ballet with music by Igor Stravinsky and choreography by Michel Fokine. The story of the ballet is based on Russian fairy tales. The ballet was written for the 1910 Paris season of Ballets Russes and premiered on 25 June 1910. The Firebird was played by Tamara Karsavina; Ivan Tsarevich by Michel Fokine; Kaschei, the Immortal by Alexey Bulgakov; and The Beautiful Tsarevna by Vera Fokina. The ballet was a huge success. Stravinsky later arranged music from the ballet for three concert suites.

Prince Ivan enters the garden of the sorcerer, Kashchei the Immortal. Ivan sees and catches the Firebird. She begs for her life, and promises Ivan she will help him whenever he needs her. 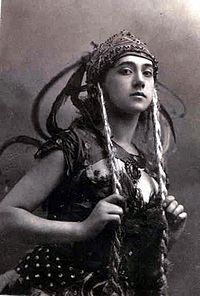 Tamara Karsavina as the first Firebird, 1910

He sends all of his magical creatures against Ivan, but the Firebird intervenes. The creatures are made to dance. As the sorcerer sleeps, Ivan learns the secret of his immortality from the Firebird.

The sorcerer's soul is contained in an enormous egg in the garden. Ivan destroys the egg, and the sorcerer dies. The sorcerer's horrible creatures and his palace disappear. The princesses remain alive. Ivan is united with the princess he loves.