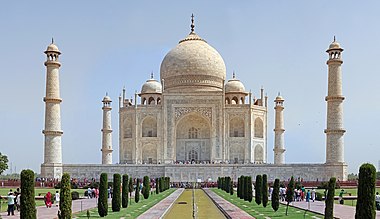 Southern view of the Taj Mahal

The Taj Mahal is a white marble tomb (mausoleum) in India. It was built between 1632 and 1653 by Mughal emperor Shah Jahan in memory of his third wife, Mumtaz Mahal.

It is in the city of Agra, Uttar Pradesh. It is widely thought as one of the greatest works of art in the world. it is one of India's biggest tourist attractions.

It was chosen as one of the New Seven Wonders of the World in 2007.[1] It is listed as a UNESCO World Heritage Site, together with the Agra Fort, 2.5 kilometers away.[2]

A view of the Taj Mahal from the east

The Taj Mahal is an example of Mughal architecture – a mixture of building design ideas from Islamic Indian, Persian (old Iran), and Muslim arts.

Shah Jahan was entombed in the Taj Mahal with his wife.

The Taj Mahal was constructed with materials from all over the world, and over 20,000 people were used to move building materials. It is generally thought that Ustad Ahmad Lahauri was in charge of the construction.[3] The construction was finished in 1653.[4]

Many people think it is one of the most beautiful buildings ever built. However, it is slowly being damaged by acid rain.[5] A nearby oil refinery has been blamed for some of the damage.