Strasbourg city center with its Cathedral.

Strasbourg is a city located in north-eastern France, next to the Rhine river which forms the German border. Strasbourg is the capital and the main city of the Alsace region. In 2006, there were 272,975 inhabitants in the city proper and 467,375 in the whole urban community.

The European Parliament seats in Strasbourg.

During the last two centuries, Strasbourg was French up to 1871, then German from 1871 to 1919, and finally French since 1919, except the 1939-1945 period. Stakes of a lot of wars between France and Germany, Strasbourg and the Alsace region are now symbols of French-German reconciliation and of European unity, that's why Strasbourg is the seat of several European institutions, especially the Council of Europe, the European Parliament and the European Ombudsman of the European Union. 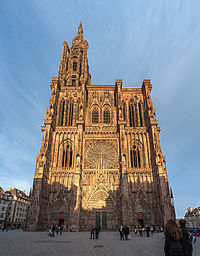 Strasbourg's most famous monument is the cathedral (Notre-Dame de Strasbourg). It is 142m high. It was built between 1176 and 1439. It is in constant renovation, because it is so old. It is the second tallest cathedral in France after Rouen. It is made of sandstone from the Vosges Mountains.