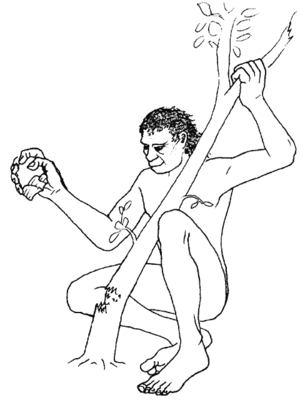 A man using a shaped stone to cut down a tree.

The Stone Age is a period of prehistory in which humans people created stone tools, mainly weapons for hunting, like spears and arrows. However, stone was not the only material used during this period, a lot of wood and bone was also used.

During the Stone Age, several important events occurred, such as human evolution, the discovery of fire, the use of caves as housing, the start of wearing clothing, among many other things. The men dispersed around the world from Africa (it is believed to be the birthplace of humanity). When this period begins and when it ends has not been exactly defined, but it is considered that it began 2.5 million years ago.

After this stage, the Copper Age (or Chalcolithic) and the Bronze Age began.

The Stone Age is divided by the following three stages:

A stone that has been sharpened to be used as a hand axe.

The word Paleolithic means ancient stone (paleo= ancient, lithic= stone). During this period, two principal techniques were used: the hammering and carving of stone. It started about 3 to 2.5 million years ago (with the process of hominization, see prehistoric man) and ended about 20,000 years ago. Human beings were nomads, they lived in caves, were hunter-gatherers (lived off of hunting, fishing, and gathering of wild fruits), formed small groups, and divided the work: the men took up hunting while the women focused on gathering fruit.

It is the far longest period in the humanity's time.

Arrow point from the Mesolithic period.

The most abundant weapons were bows, made of wood and animal tendons, with arrows that incorporated at their points small stone tips of varied geometrical shapes.

People were still only hunter-gatherers, they didn't cultivate or farm animals except dogs.

The word Neolithic means new stone (neo = new, lithic = stone) During this stage, the technique of polishing stone was used, a technique more developed than the previous. It began in the Middle East 10,000 BC (invention of agriculture). Human beings were sedentary, they lived in small villages, formed more numerous groups, were producers and divided the tasks. Pottery was invented during this period.

Neolithic and Stone Age ended between 3,000 and 2,000 BC (which is between 5,000 and 4,000 years ago) when people discovered the art of smelting (making metals). The first metal was copper, followed by bronze. People probably began using bronze instead of just stone in the Middle East. Not so long afterwards came the invention of writing (if not roughly in the same period).