Sri Lanka (Sinhalese: ශ්‍රී ලංකාව, śrī laṃkāva, Tamil: இலங்கை, ilaṅkai), is a third world country located in the Indian Ocean, south of the country of India. It used to be known as Ceylon until 1972. The small country (about the size of Alabama) earned its independence officially on February 4, 1948. Sri Lanka is a country with a deep history and rich culture. Sri Lanka, currently and for centuries, has been a known island for tourism and the rich culture today.

Sri Lanka, today, is a republic and a unitary state governed by a presidential system. The country's capital is Sri Jayawardenepura Kotte, near the biggest city (which is wrongly claimed as the capital of Sri Lanka), Colombo. Sri Lanka is an important producer of tea, coffee, gemstones, coconuts, rubber, and cinnamon. Sri Lanka's two nicknames are the "Pearl of the Indian Ocean" and "The Nation of Smiling People". Sri Lanka is also part of the United Nations.

A Buddhist statue in the ancient capital city of Polonnaruwa, 12th century 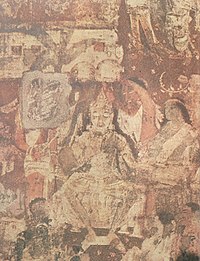 
Another annual date of ancient Sri Lanka is the arrival of Buddhism from Devanampiya Tissa of Sri Lanka. Epigraphic sources show the appearance of Buddhism around the 3rd century B.C.


The entire ancient period of ancient Sri Lanka is dominated by the Anuradhapura Kingdom, which includes Sri Lanka's ancient history in one place. The Sri Lanka Kingdom moved into Anuradhapura in 380 B.C., from there onwards, the city of Anuradhapura stayed as the capital of Sri Lanka for more than 1000 years, until the fall of the kingdom in 1017 A.D., when Rajendra I sent a large invasion on the kingdom. Thus, the capital then moved to Polonnaruwa.

The next centuries consist of Tamil rulers fighting over the island, which resulted in the north section ruled by Tamils, primarily Hindus, and the south section controlled by the Sinhalese, primarily Buddhists.

Colonial Powers finally achieved power over Sri Lanka in 1505, when the Portuguese took possession in the county until the Dutch India Company took control in 1658 until 1796 when the British took over the country, Sri Lanka became an English Colony officially in 1802. The British (which means Sri Lanka did too) developed Coffee, Tea, and Rubber. Finally, in 1948, (after uniting the Tamils and Sinhalese) Ceylonese rulers finally gained independence from the British. Sri Lanka became part of the Commonwealth of Nations.

S.W.R.D. Bandaranaike became Sri Lanka's prime minister in 1956, resulting in championship of Sinhalese Nationality (resulting in minorities of Tamil civilians, in result, the Tamil Tigers are founded) and full support of Buddhism. S.W. was assassinated by a monk in 1959. Left is his widow, Sirimavo Bandaranaike, who became the world's first female Prime Minister.

The first president of Sri Lanka is William Gopallawa.

Sri Lanka is known as a Tropical Country, so that would mean that the climate is usually wet from rain, or Monsoons, which are periods of rain over a certain amount of time, India's monsoons travel down to Sri Lanka, so you would expect much rain.

Other than rain, the temperatures at Sri Lanka are hot - extremely hot all year long, that is why residents at Sri Lanka where "man skirts", or sarongs, to keep cool.

Otherwise, Sri Lanka climate is somewhat the same as India's, Bangladesh's, and Pakistan's.

The Sri Lankan Culture is very interesting, from the foods to the religion. But, the culture did, in-fact, dramatically changed when the British lost possession of the country, which means that there are no Sri Lankans with baskets on there heads walking on the streets working for the British government, as what the country was going through, even though the culture totally changed, it has yet, maintained most of there more earlier traditions. They still do work for the British somewhat, with clothing, and the production of rubber.

Yet, Sri Lanka has also been maintaining ancient aspects too, such as the arrival of Buddhism. Due to the island's history of immigrants and Indian rulers, the island's culture is somewhat widespread, and mixed in with Indian Culture also.

Well, Sri Lanka is best known for a couple of traditions they have, one of them is the main sport of the country, cricket, which has been a sport there for a quite a long time. The traditional music and food are also pretty "main" in the culture as well. The Demographics of Sri Lanka are: Sinhalese 74.8%, Sri Lankan Moors 9.23%, Indian Tamil 4.16%, Sri Lankan Tamil 11.21% and Other 0.6%.