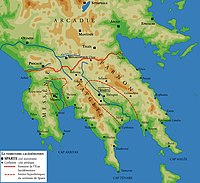 Sparta was a city-state in ancient Greece on the banks of the Eurotas River in Laconia. This is in the south-eastern Peloponnese.

About 650 BC, Sparta became the dominant military land-power in ancient Greece. Sparta led the Greek forces during the Greco-Persian Wars (499-449 BC).

Sparta was the chief enemy of Athens during the Peloponnesian War (431-404 BC). Sparta was victorious in this war. Sparta's defeat by Thebes in the Battle of Leuctra (371 BC) brought Sparta's prominent role in Greece to an end.