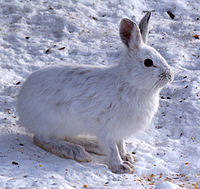 Snowshoe hare (scientific name : Lepus americanus) is a hare. It lives in North America as far as Alaska. Snowshoe hares are well adapted to snow. They have large feet, which allow them to walk on snow. The snowshoe hare is sometimes called the snowshoe rabbit, but it is a real hare, and not a rabbit.