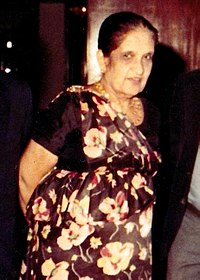 Sirimavo Bandaranaike (සිරිමාවෝ රත්වත්තේ ඩයස් බණ්ඩාරනායක, சிறிமாவோ ரத்வத்த டயஸ் பண்டாரநாயக்க ; 17 April 1916 – 10 October 2000) is a famous Sri Lankan politician and the first female politician head of government. She served as Prime Minister of Ceylon and Sri Lanka three times, 1960–65, 1970–77 and 1994–2000, and was a long-time leader of the Sri Lanka Freedom Party.

She was the widow of previous prime minister, S.W.R.D. Bandaranaike, who died of a gunshot (assassination) by a Buddhist monk, and is the mother of the fifth president of Sri Lanka, Chandrika Kumaratunga, and mother-in-law of Vijaya Kumaratunga.

Sirimavo Bandaranaike was born on 17 April 1916 in Ratnapura, Ceylon (now Sri Lanka) to a Radala Family. Born to Barnes Ratwatte, Dissawa of Sabaragamuwa and Rosalind Mahawelatenne Kumarihamy of Mahawelatenne Walauwa, Balangoda, she was the eldest of six, with four brothers and one sister. She was born into a very political family, with her father as a member of the State Council of Sri Lanka and the Senate of Ceylon. Her brothers where Justice Barnes Ratwatte II, Dr Seevali Ratwatte, Dr Mackie Ratwatte (who served as her Private Security during her premiership) and Clifford Ratwatte, former Member of Parliament for Balangoda and Chairman of the State Plantations and Sri Lanka Tea Board. And her youngest sister, named Patsy Ratwatte, married a colonel who established the Central Command of the Ceylon Army.

During this time Sirimavo was brought forward as legitimate successor to her husband's party leadership and she entered politics. In 1960, M. P. de Zoysa Jnr stepped down from senate in parliament, which led to Sirimavo in for the job, which she was promoted as a member of the Senate from the SLFP. She led her party to win the Ceylonese parliamentary election, July 1960, in which she stated that he would continue his husband's policies, notably the Sinhala Only Act, and to proceed with repatriation of the estate Tamils to India.