From Vikidia, the encyclopedia for 8 to 13-year-old children that everybody can make better
(Redirected from Sir Walter Raleigh)
Jump to: navigation, search
Sir Walter Raleigh lived from about 1554 to 1618. He was an English explorer, warrior, and writer. 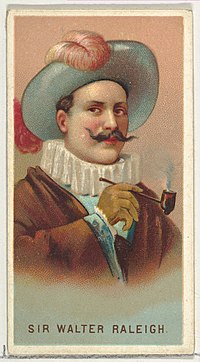 He was a noble in the court of Queen Elizabeth I.

He tried to make a colony on Roanoke Island in North America. The colony was lost.

He left the Queen's court and gave his friend Edmund Spenser money to help him write.

Later Raleigh was a hero in attacks against Spain.

King James I put him in prison for over a dozen years for treason. The king believed that Raleigh was in a plot against him. Raleigh wrote poetry and worked on a history book in prison. He was freed for a few years, but finally, the king had him executed.