Siegfried is an opera. The words and music were written by Richard Wagner. It is the third of the four operas that comprise Wagner's The Ring of the Nibelung. Siegfried is loosely based on the tale of the hero Sigurd in Norse mythology.

Siegfried was first performed as part of the premiere performance of The Ring at the Bayreuther Festspielhaus in Germany on 16 August 1876.

Wagner started work on the Ring in 1848, and completed the cycle in 1874. By 1850, he had completed the text for Siegfried's Death. This opera would become the fourth and last in the cycle. It would be retitled Twilight of the Gods.

Wagner decided to expand Siegfried's Death by telling the story of Siegfried's youth. This retelling became another opera, Siegfried.

The cycle in performance order is The Rhine Gold, The Valkyrie, Siegfried, and Twilight of the Gods. 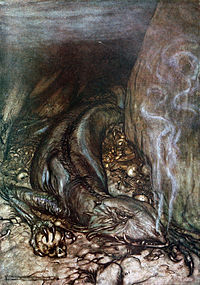 Act I.
The magic ring, the Tarnhelm, and the golden treasure of the gods lie in a cave guarded by the dragon, Fafner.

Mime, the Nibelung dwarf, wants this treasure for himself, and hopes to get it with the help of Siegfried, his foster son. He has taught Siegfried to kill the dragon.

Siegfried wants to know his parentage, and Mime is forced to tell him. Siegfried's father's sword Nothung lies shattered, and Mime tries to reforge it without success.

Wotan enters Mime's dwelling. Wotan tells Mime that the sword Nothung can only be reforged by "one who knows no fear". This is Siegfried.

Siegfried reforges the sword successfully. Mime prepares a poison to administer to Siegfried after he has killed Fafner. He wants to keep the treasure for himself. The two set off for Fafner's cave.

Act II.
Siegfried and Mime arrive at Fafner's cave. Siegfried rouses the dragon and kills it. Mime leaves to get the poison that will kill Siegfried.

Siegfried accidentally touches his lips with Fafner's blood. He suddenly understands the language of birds. A forest bird warns him that Mime cannot be trusted.

Siegfried kills Mime when he returns with the poison. The forest bird tells Siegfried of Brünnhilde. Siegfried runs out at once to find the sleeping maiden.

Act III.
Wotan asks Erda about the fate of the gods. She answers without certainty. Wotan takes this to mean that their the reign of the gods will pass away.

Siegfried wakens Brünnhilde. She is glad it is Siegfried who has wakened her. At first, she is uncertain about the loss of her divinity, but then joins Siegfried in a song praising love.