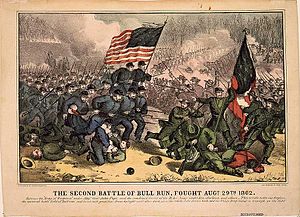 "Second Battle of Bull Run" by Currier and Ives

The Second Battle of Bull Run (or Second Manassas) was fought August 28–30, 1862 in Prince William County, Virginia. It was the culmination of an offensive campaign waged by Confederate Gen. Robert E. Lee's Army of Northern Virginia against Union Maj. Gen. John Pope's Army of Virginia. It was a battle of much larger scale and numbers than the First Battle of Bull Run (First Manassas) fought in 1861 on the same ground.