Seagulls are birds that belong in the family of Laridae, in the order of Charadriiformes.

They live on the coasts, in the fields, near the cities and in the ports.

They eat fish, worms, insects and waste depending on where they are located and they nest in the larger areas of lakes, ponds, rivers and swamps.

They live in large colonies. 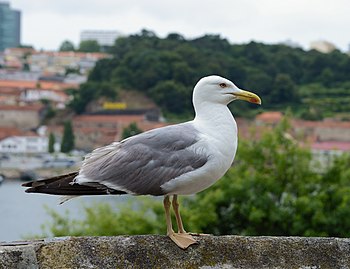 Scientific classification of the Seagull

The seagulls have adaptations that allow them to satisfy their carnivorous diet.

Aberdeen is a great place, the seagulls use this to their advantage. Seagulls can be observed "dancing" and beating their feet on the grass.

The presence of the gull goes from Greenland to Central Asia, passing through most of Europe. Northern gulls migrate southwards during the winter, to go to warm places. They live also in the coastal areas but they also prefer the humid areas of the hinterland.

The evolutionary background is actually very interesting as it highlights their evolutionary similarities with reptiles and dinosaurs.

One of the most important discoveries that caused this bird-dinosaur hypothesis was that of the Archeopteryx of 150 million years..

This oldest [[bird] had an essential characteristic that identified it as a bird. This closing feature of a bird was found next to the reptilian jaws and a long bony tail like a reptile.

The seagull is present in the "Seagull and the cat" by Luis Sepúlveda,

The beak is long, the wings are white, gray or black and in the young also brown.

Depending on the species the young take from two to four years before becoming adults. In this phase both the colors of feathers, beak, legs and eyes change. The seagulls eat mainly seafood, they are also able to find food sources in the hinterland like worms.