Restoration of a group of Eurypterus. Eurypterus are believed to have lived in shallow, sandy bottoms near beaches.

Restoration of an Eurypterus. This animal was about 15 to 20 cm long.

Eurypterids, nicknamed sea scorpions, were a group of aquatic arthropods that thrived millions years ago, and are now extinct. Despite their general scorpion-like appearance, that gave them their name, eurypterids are only distant cousins of the scorpions: they are not close relatives. The eurypterids' closest relatives still living nowadays are the horseshoe crabs.

Most eurypterids were coastal marine predators, though some of them are believed to have lived in fresh, or at least brackish water. There were many species, the best-known being Eurypterus. Some eurypterids (like Pterygotus or Jaekelopterus) were among the greatest arthropods that ever lived on Earth. Jaekelopterus could have reached about 2.5 meters in length (about the size of a crocodile), and must have been a superpredator of its time.

Horseshoe crabs are close relatives to th eurypterids, that are still living nowadays. 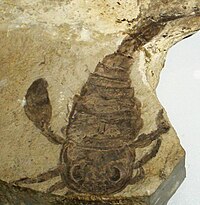 Eurypterids had a body covered with a hard shell, divided in various part, as in every arthropod. The body was quite flat, elongated, and ended by a kind of spiked "tail" (named, by the scientists, a telson), that looks like a scorpion tail. The Eurypterids, however, had no sting, and are believed to have not been poisonous. The prosoma, or "head", was flat, rounded, and bear a pair of compouned eyes, that made them able to detect their preys.

Eurypterids had various pairs of limbs, some of them, bearing claws, made to catch preys, others, looking like legs, to walk on the marine floor, others ones looking like flippers, to swim in the water, and the latest bear gills that the animal used to breath.

Most of eurypterids were about 15 to 25 cm longs animals, but some were pretty much larger, like the famous Pterygotus, or its less-known, and even larger cousin, Jaekelopterus, that could reach about 2.5 m.

They were carnivorous predators, that hunted animals such as trilobites, a kind of very common, small arthropods at these times, or some of the first fishes (close relatives to the first ancestors of Vertebrates), such as Cephalaspis...

They shared their environments with other animals, like their believed close cousins, the horseshoe crabs ; their more far related cousins, the scorpions, to whom they are often referred, appeared about the same time, and some, as Brontoscorpio, one of the earliest known scorpio, were also aquatic animals.

But, about 268 millions years ago, a cataclysm destroyed most of living species on Earth ; even though the horseshoe crabs and scorpions passed through it, most of marine animals of these times, such as trilobites, and the eurypterids, fully disappeared.