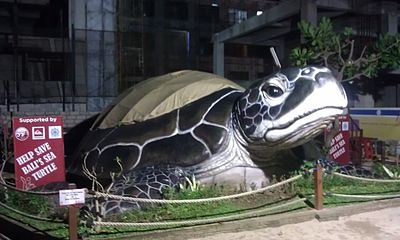 The sea turtle has a large head and a brown-red carapace, streaked with dark spots in the young specimens,

from females by the long tail.

The scientific name of the Sea Turtle is Caretta Caretta.

The sea turtle is more widespread in the Mediterranean.

The species is widespread in many seas of the world but it is strongly threatened throughout the Mediterranean and it is now on the verge of extinction in Italian territorial waters.

The small sea turtle eats zooplankton and starts as an adult to eat small fish, crustaceans or adult squid.

Their habitat is deep, warm waters and they are close to the coasts.

Their reproduction environment is being destroyed due to human disturbance.

They are extremely ancient animals, widespread in all continents and almost all the ecosystems of the earth.

Yet we know almost little information about the origin of the turtles.

"The clean sea mission book" : the reader discovers the magical world of sea turtles and sharks.

They are animals that have adapted to the aquatic life and at birth is about 5 cm long.

It has a brown-red carapace, streaked with dark in the young.

The reason why sea turtles cross the planet from one end to the other end is to go to lay their eggs, always in the same beach, it is still a mystery without solution!

Until not many years ago, sea turtles were known in the form of jewelry, boxes, hair stops, bracelets, handbags and refined broths.