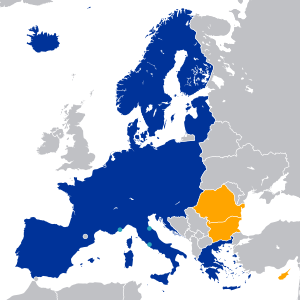 The Schengen Area is an area between 26 countries in Europe, which abolished all kinds of border control. The area functions as one single market with one visa policy. The area is named after the town of Schengen in Luxembourg. In 1985, the Schengen Agreement was signed there.

Although the borders are open, a country can close the borders in the case of an emergency. Austria, Denmark, Germany, France, Norway and Sweden closed their borders or a part of their borders during the European migrant crisis. Most of these border controls are for a few months.