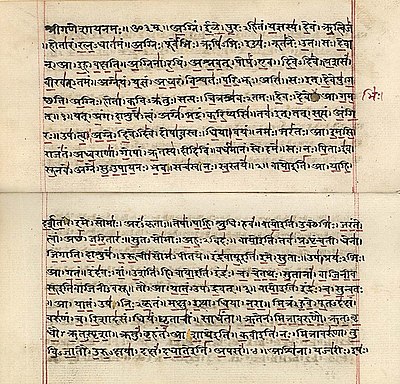 Sanskrit is an old language of India, which is commonly used by priests and scholars of old texts including many religious ones. It is the sacred language of Hinduism. Today, about 14,000 people in use it as their daily language. A little more than two hundred thousand (200,000) people in the world can speak it well, while many people know at least a little Sanskrit because of the importance it has to other Indian languages and the Hindu religion.

Sanskrit is written in the Devanagari script, one of the oldest writing systems in the world. Some other languages such as Hindi and Marathi are also written in Devanagari, but Sanskrit is the first language to use this writing system. Originally Sanskrit was not a written language, and when it started being written, a number of different scripts were used initially, until Devanagari became the standard.

Sanskrit was used widely in ancient times, but nowadays there are very few areas in the world where this language is spoken. It was invented in India, and some communities in India still speak in Sanskrit. Many Asian Buddhists can also speak Sanskrit. It is found in Hindu holy writings and hymns. It is known to be used regularly in some areas in South India, though. In many remote villages in India Sanskrit is spoken even today. Sanskrit is the official language of the Indian state of Uttarakhand in India.

There are many theories to how Sanskrit came into existence. One of them is about an Aryan migration from the west into India who brought their language with them. Sanskrit is an ancient language and is comparable to the Latin language spoken in Europe. The earliest known book in the world was written in Sanskrit. After the compilation of Upanishads, Sanskrit just faded due to hierarchy. Sanskrit is a very complex and rich language, which has served to be the source for many modern Indian languages, just like Latin is the source for European languages like French and Spanish.

Sanskrit was considered a high-status language and was spoken by officials, kings, noblemen, etc. It was difficult for the common man to understand refined Sanskrit. Sanskrit eventually became almost extinct from day-to-day usage, but it was kept alive by holy men, scholars, and Buddhists.

Some Sanskrit word are used in English such as Himalayas, Buddha, or Yoga.

Here are other basic words:

Many ancient writers such as Vyasa, Valmiki, Kalidasa, Bhasa, Bhartruhari, and Chanakya wrote in Sanskrit. It is a rich language and they became famous for enriching it further. The great Hindu epics, Ramayana and Mahabharata, are written in Sanskrit, as are the Vedas, Upanishads, and Subhashitratnani.

A poem in Sanskrit[edit | edit source]

Your right is to work only,
But never to its fruits;
Let not the fruits of action be thy motive,
Nor let thy attachment be to inaction.
—Shri Bhagvatgita (2:47)