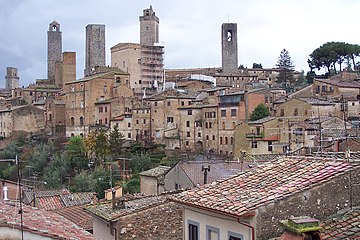 The towers of San Gimignano

San Gimignano was founded as a small village in about 1300 BC by the Etruscans. The name of the city come from by a saint, Saint Geminianus, who had defended it from Attila's Huns.

In medieval (Middle Ages) and Renaissance times, it was a stopping point for pilgrims on their way to Rome and the Vatican City as it sits on the medieval via Francigena.

In 1199, during the period of its highest splendour, the city made itself independent from Volterra.

There are many churches in the town: the two main ones are the Collegiata, a cathedral, and Sant'Agostino.

The Communal Palace is now the home of San Gimignano Gallery. Hhere there are works by Pinturicchio, Benozzo Gozzoli, Filippino Lippi, Domenico di Michelino, Pier Francesco Fiorentino, and others.

Tea with Mussolini, a 1999 drama about English and American women in Italy during World War II, was filmed in part at San Gimignano.