Japanese samurai in armour, in the 1860s.

The samurai (or bushi) were Japanese warriors. The word samurai comes from the Japanese Verb saburai, which means to serve (someone). In the past, there were many different Classes of people in Japan. "Samurai" were members of the important Military Class before Japanese society changed in 1868.

During the chaotic Era of Warring States (sengoku jidai, 1467-1573), Japan was made up of dozens of independent states which were constantly fighting each other. This is why the country needed lots of samurai. Between the wars, many samurai were working on farms. Many of the famous samurai movies by Akira Kurosawa take place during this era.

Toyotomi Hideyoshi (1536 or 1537-1598) won many wars against other clans. When he reunited Japan, Hideyoshi developed a very strict social caste system. It was later completed by Tokugawa Ieyasu and the rulers after him. Between the wars, many samurai had always worked on farms. Hideyoshi forced all samurai to decide between a life on the farm and a warrior life in castle towns. Furthermore, he made it a law that the samurai were the only people who were allowed to arm themselves with a sword.

In the Edo period (1603-1867), the samurai were the most important social Caste, followed by the farmers, artisans and merchants. All samurai had to live in Castle towns. The samurais' Lords paid them with rice. Some samurai did not have Lords. These samurai were called "ronin". The "ronin" caused some problems for Japan in the early Edo period.

In 1615, Tokugawa won an important battle when he took Osaka Castle. The Tokugawa clan did not have any more Rivals. Japan became very peaceful for about 250 years. In these 250 years, military skills became less important. Most samurai became bureaucrats, teachers or artists.

In 1868, feudalism ended in Japan. This was the end of the samurai class. 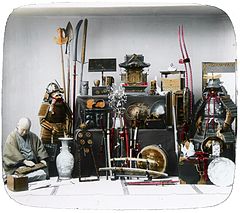 1890s photo showing an armor and weapons used by samurai. 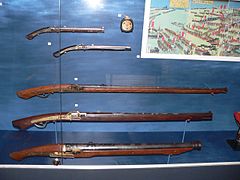 A samurai believed that his swords hold his soul, so they became the most important thing he had.

Samurai were allowed to fight anyone who did not show them proper respect. Every sword had to be tested; to do this, the owner of the sword could execute a criminal. This allowed the warrior to test his sword's sharpness. Samurai led their lives according to the ethic code of bushido, which translates as "the way of the warrior". This signifies loyalty to one's master, self-discipline and respectful, ethical behaviour from visitors to enemies on the battlefield. When a samurai lost his master, also called Daimyo, he became a Ronin.

After a defeat or the samurai dishonored himself by not following the code of bushido, the samurai must commit ritual suicide, which is called Seppuku. To a samurai, death was better than having no honour. In Seppuku, samurai cut their stomach before the enemy could capture them, in the case of a war. In Europe, this ritual is often mistaken for hara-kiri. Hara-kiri means "to cut the stomach". In other words, hara-kiri refers only to the action done by Seppuku and not the whole ritual. Seppuku was thought to be a more honourable death for a samurai than being captured by the enemy. Another reason to commit Seppuku was the death of the Daimyo. With this ritual, a samurai was able to show how loyal he was to his dead master. There were periods when Seppuku was forbidden, but there were still samurai who committed it.

The bushi's training methods like meditation, judo and kendo are still followed today. Although there is no longer a samurai class in modern Japan, the successors of these families are well-respected.

It has to be noted that the term "Samurai" is a gender-specific term, referring to males specifically. An academic article on this can be found here

Japanese women had a very clear role in Japanese society. Most of them took care of house and crops and raising children. There were a few women who were samurai. One of the most famous Japanese samurai women was Itagaki. She lived during the end of the Heian period (794 – 1192) and owned her own army of about 3000 warriors. In 1199, Itagaki fought against 10.000 Heike soldiers. She was very good at handling the naginata sword, which made her very famous.

Samurai women were also trained to defend themselves and their children. They usually did this while their warrior husbands were busy in battles. The samurai wife was called okusan (in translation "one who remains at home"). This is why samurai women were trained to handle polearms (naginata) and short daggers (Tanto). During the Edo period (1600-1800 AD), Japanese women were trained to handle naginata by the age of 18. The short kaiken knife was used by young women to defend their virtue or, if they lost it, to take their own life.

The Japanese women, especially the samurai wives, were very respected. They had qualities that made them an important part of Japanese society. They were obedient, self-controlled, loyal, responsible, etc. Wives of rich samurai were very well dressed and enjoyed a good position in society. They did not do any physical work. However, no women were allowed to be involve in politics or warfare.

Of course, there were women who were powerful. For example, in Muromachi period, the wife of Ashikaga Yoshimasa (1449 – 1474, 8th shogun), Hino Tomiko ruled in his place. The Toyotomi Hideyoshi's (1536 – 1598) mistress became the real master of Osaka castle after his death. Yamauchi Kazutoyo's (1545 – 1605) wife, Chiyo, was one of the most loyal wives known in Japanese history. Her power was of another kind, she supported her husband during hard times, saving to buy a horse for him. Yamauchi Kazutoyo never took a mistress, though it was a known tradition for samurai, and he never left Chiyo although she was only able to have one child (a girl, Yone).

During Tokugawa Era (1603 – 1867) women's education became very important. Girls were taught to write, read, dance, etc. beginning at a young age. While the main criteria for marriage changed, among the most important were: physical attractiveness and education. Special books were written for women. They mainly taught how to take care of house and children. But, by the end of the Tokugawa period women attended philosophical and literary classes.