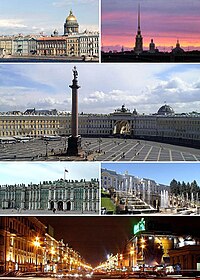 Saint Petersburg is the second most populous city in Russia, after Moscow. It is located in the northwestern part of the country on the Neva River at the head of the Gulf of Finland on the Baltic Sea.

Saint Petersburg is a major European cultural center, and also an important Russian port on the Baltic Sea. The city is home to The Hermitage, one of the largest art museums in the world. It is also home to the world class Mariinsky Opera and Ballet.