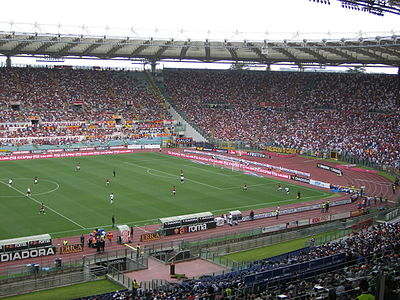 The Stadio Olimpico in Rome.

S.S. Lazio is a soccer club based in Rome; it plays in Serie A, the first championship in Italy.

Some of the most famous players who have played for Lazio include Silvio Piola, the absolute top scorer in Serie A with a total of 274 goals, Giorgio Chinaglia, Bruno Giordano, and more recently, Alessandro Nesta, Tommaso Rocchi and Miroslav Klose.

The symbol of Lazio fans, who always watch the matches in the stadium's North Bend, is Mr. Enrich - a man with a bowler hat.

The strongest twinning of Lazio fans is that with Inter's fans, which was born in the mid 1980s.

There are several episodes to confirm this, such as in the 1997-98 UEFA Cup finals in Paris, and on May 5, 2002 when the Lazio fans congratulated their Inter friends for winning the championship.

The last episode was in 2009 when at the Lazio-Inter 0-2 match the biancocelesti supporters hung a banner that read, "Oh, no," ironically at the hated A.S. Roma rivals, as a victory by Inter meant that the Giallorossis (Roma) would lose more points towards the championship.

Another real twinning was with the Triestina fans when the two teams were both active in Serie B.

They also maintain simple friendships with the supporters of Hellas Verona, Ascoli and Chieti.

The strongest rivalry is definitely the one with Rome, their forever opponents; they compete against one another in one of the most heartfelt derbies in all the world.

There is rivalry with the supporters of Napoli due to their past twinning with Roma.

Same thing for the Greek supporters of Panathinaikos.

And then there are many rivalries in Italy amongst Pescara, Perugia, Ternana, Catanzaro and Taranto born in the 1970s.

In the 80's the rivalry arose with Sambenedettese, Genoa, Sampodria and Pisa

In the 90's instead with Bologna, Fiorentina, Torino, Lecce, Foggia, Udinese, Vicenza, Palermo.

There is a rivalry with Milan seen by various supporters of Rome and Milan and a championship won by the Milan FC going against Lazio in the ultimate days.

there is a much rivalry also with Juventus seeing the hatred that the Lazio players have in regards to the Juventus management and seeing there rivalry against the Inter fans.

Internationally they are twinned with clubs like Real Madrid and Espanyol; the second twinning began as with the supporters of Chelsea and Levski Sofia, namely a pseudo-political alignment.

That with West Ham is only for the style of fans.

On the contrary, international rivalries were born at the end of the 1990s; against the French fans of Olimpique Marsailles, the English of Arsenal and the Spanish of Atlètico Madrid.