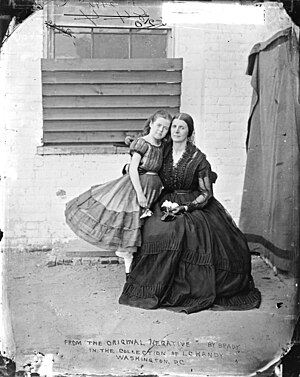 Rose O'Neal Greenhow (1813 or 1814 – October 1, 1864) was a spy for the Confederacy during the American Civil War. She was a socialite in Washington, D.C. with connections among high-ranking military men, senators, and other celebrities. On July 9 and July 16 of 1861, Greenhow passed secret messages to Confederates about the Union plans regarding Bull Run. Confederate President Jefferson Davis credited Greenhow's information for the Confederate victory at the First Battle of Bull Run on July 21. Greenhow died on October 1, 1864, of drowning near Wilmington, North Carolina. She was honored with a military funeral in Wilmington, and the Ladies Memorial Association, in 1888, marked her grave with a cross that reads "Mrs. Rose O'Neal Greenhow. A Bearer of Dispatches to the Confederate Government."