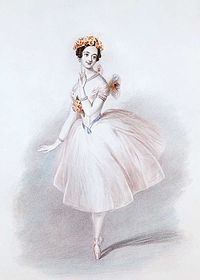 Romantic ballet is a genre of ballet. It is characterized by a narrative story, and exotic locales such as tombs, graveyards, and the Orient.

The emphasis in romantic ballet is upon real people rather than the gods and goddesses of the Baroque ballet. The development of better lighting in the theatre made it possible to stage thrilling supernatural scenes. Supernatural women such as fairies and witches were featured in the romantic ballet.

The genre began with Marie Taglioni's ethereal performances in The Ballet of the Nuns and La Sylphide. The genre slowly declined and gave way to the classical ballet of Imperial Russia. The last romantic ballet is said to be Coppélia of 1870.