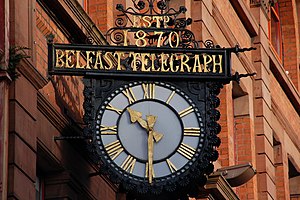 A clock in Belfast.

If a lower value symbol is before a higher value one, it is subtracted. Otherwise it is added.

For the numbers above X, only the symbol right before it may be subtracted: so 99 is: XCIX (and not IC).

The System that is in use today is: Whenever the same symbol is written four times, it is replaced by subtracting it from the next higher number (5,50,50,500). That way, IV is written instead of IIII (4), XL instead of XXXX (40), etc.

Usually only one number is subtracted, not two. So 8 is always VIII and never IIX

Especially on clocks and watches, IIII can sometimes still be found. This is done partly because the IIII for the 4 o'clock position aesthetically balances the VIII for the 8 o'clock position. Also, some use it as a metaphor that IIII was commonplace in an period of time earlier than the idea of subtraction - IX - was introduced into writing Roman numerals. (4:00 comes earlier in the day than 9:00.)

Notations in Roman numerals for numbers higher than 3,001 are rarely seen. One system utilises V and X with bars over them to signify 5,000 and 10,000, respectively.

So in the lists above, though 5000 etc. may appear as V please when writing it add a bar on top.

Numbers & years are written as Roman numerals in this way:

What they are used for[edit | edit source]