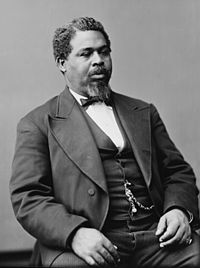 He was born in slavery in South Carolina. He was forced to serve as a slave on the Confederate navy boat Planter.

He and a dozen other slaves on board took over the ship. Using the Confederate secret code signals, and pretending to be the captain, he got through the Confederate fleet. Then he turned the boat over to the Union side.

Later in the war, he became the captain of the Planter.

After the war, he was elected to the U. S. Congress.