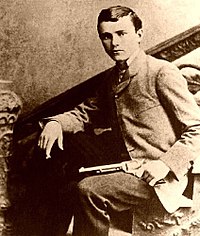 Robert Newton "Bob" Ford (January 31, 1862 – June 8, 1892) was an American outlaw. He is best known for shooting his gang leader Jesse James in the back of the head and killing him. Ford shot James because Missouri governor Thomas T. Crittenden placed a $10,000 bounty on James.

On June 8, 1892, while Ford was drinking in his tent saloon, Edward Capehart O'Kelley entered with a shotgun. O'Kelley said "Hello, Bob." and when Ford turned around O'Kelley fired both barrels which killed Ford instantly. "The man who shot Jesse James" was inscribed on his grave marker.[1]